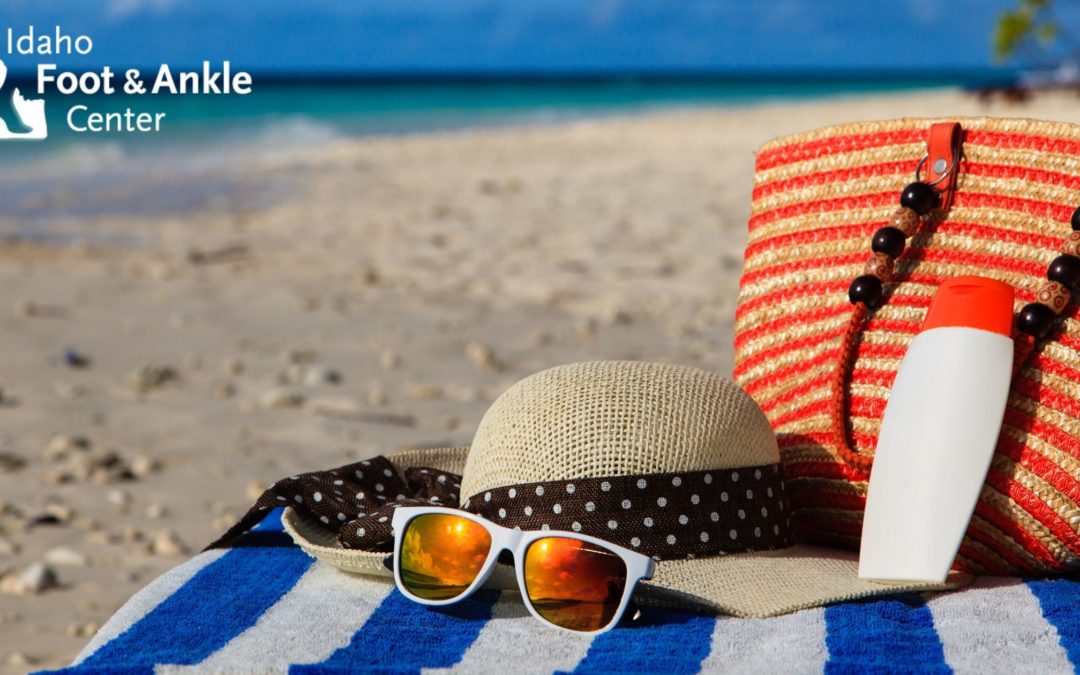 May is Skin Cancer Awareness Month! We wanted to help you be more aware of the different kinds of skin cancer and how it can affect your feet. Skin cancer is a general term for three distinct cancers that can appear on the foot: melanoma, basal cell carcinoma, and squamous cell carcinoma.

Basal cell carcinoma, the most common type of skin cancer, appears on sun-exposed areas as a smooth, raised bump or a sore that is not healing. It rarely metastasizes or causes death because it grows slowly and rarely spreads. It is easily treated with surgery or radiation.

Squamous cell carcinoma appears on sun-exposed areas as thick, red, scaly patches or as a bleeding ulcer. It is more serious than basal cell carcinoma because in some instances, it may spread to other areas of the body.

The members of the American College Foot and Ankle Surgeons warn that melanoma is the most common malignancy on the foot or ankle and more likely to be misdiagnosed than melanoma on any other part of the body. A study published in The Journal of Foot & Ankle Surgery reported the overall survival rate for melanoma of the foot or ankle is just 52 percent, in sharp contrast to the 85 percent survival rate for patients with melanomas on other areas of the body.

Even though Americans are more diligent than ever in protecting their bodies from the growing threat of malignant melanoma, they are overlooking the most misdiagnosed and fatal site of the disease—their feet.

Melanoma can be found on any area of the foot or ankle, even under a toenail. Often, it appears as an abnormal mole or small area of pigmented skin. A huge problem with melanoma on the foot or ankle is it is often unnoticed in the early stages when it is more easily treated. Usually when it is finally diagnosed, it is already in the advanced stages which contributes to the higher mortality rate. If you notice any change in an existing mole or pigmented skin, you should make an appointment with your podiatrist as soon as possible.

Melanoma is caused by too much exposure to UV rays from the sun or tanning beds. While anyone can get melanoma, there are a few things that put you at higher risk:

SIGNS TO WATCH OUT :

Early detection is vital with skin cancer. If you notice any of these signs or changes on your feet or ankles, contact Dr. Kylin Kovac or Dr. Jed Erickson for an evaluation. Dr. Kovac & Dr. Erickson are Doctors of Podiatry Medicine and Foot and Ankle Surgeons. They have the education and experience to correctly diagnose foot and ankle problems, and can provide the individualized treatment plan that will be the best for you.Some content provided by The ACFAS.