Our Foot and Ankle Services

Hammertoe is a contracture (bending) deformity of one or both joints of the second, third, fourth or fifth (little) toes. This abnormal bending can put pressure on the toe when wearing shoes, causing problems to develop.
Hammertoes usually start out as mild deformities and get progressively worse over time. In the earlier stages, hammertoes are flexible and the symptoms can often be managed with noninvasive measures. But if left untreated, hammertoes can become more rigid and will not respond to nonsurgical treatment.
Because of the progressive nature of hammertoes, they should receive early attention. Hammertoes never get better without some kind of intervention. 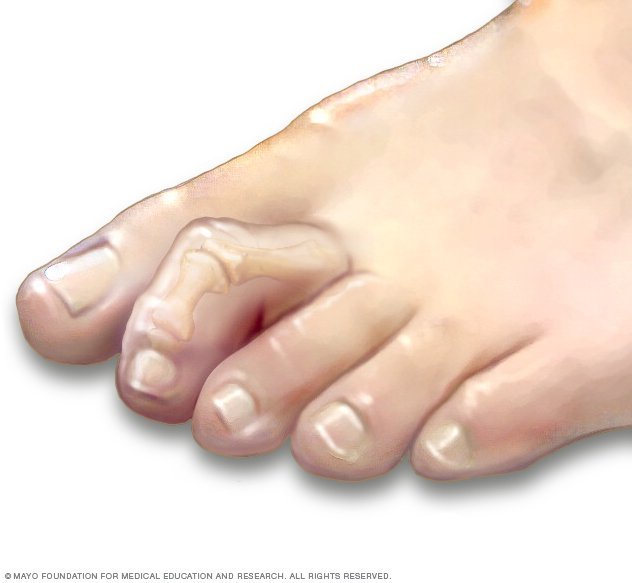 The most common cause of hammertoe is a muscle/tendon imbalance. This imbalance, which leads to a bending of the toe, results from mechanical (structural) or neurological changes in the foot that occur over time in some people.

Hammertoes may be aggravated by shoes that do not fit properly. A hammertoe may result if a toe is too long and is forced into a cramped position when a tight shoe is worn. Occasionally, hammertoe is the result of an earlier trauma to the toe. In some people, hammertoes are inherited.

Common symptoms of hammertoes include:

Although hammertoes are readily apparent, to arrive at a diagnosis, at Idaho Foot & Ankle Center, your foot and ankle surgeon will obtain a thorough history of your symptoms and examine your foot. During the physical examination, the doctor may attempt to reproduce your symptoms by manipulating your foot and will study the contractures of the toes. In addition, the foot and ankle surgeon may take x-rays to determine the degree of the deformities and assess any changes that may have occurred.

Hammertoes are progressive—they do not go away by themselves and usually they will get worse over time. However, not all cases are alike—some hammertoes progress more rapidly than others. Once your foot and ankle surgeon has evaluated your hammertoes, a treatment plan can be developed that is suited to your needs.

There is a variety of treatment options for hammertoe. The treatment your foot and ankle surgeon selects will depend on the severity of your hammertoe and other factors.

A number of nonsurgical measures can be undertaken:

In some cases, usually when the hammertoe has become more rigid and painful or when an open sore has developed, surgery is needed.
Often, patients with hammertoe have bunions or other foot deformities corrected at the same time. In selecting the procedure or combination of procedures for your particular case, the foot and ankle surgeon will take into consideration the extent of your deformity, the number of toes involved, your age, your activity level and other factors. The length of the recovery period will vary, depending on the procedure or procedures performed.

Stay Up To Date

If you would like to be notified of any updates for our office or services, add your email. Thank you