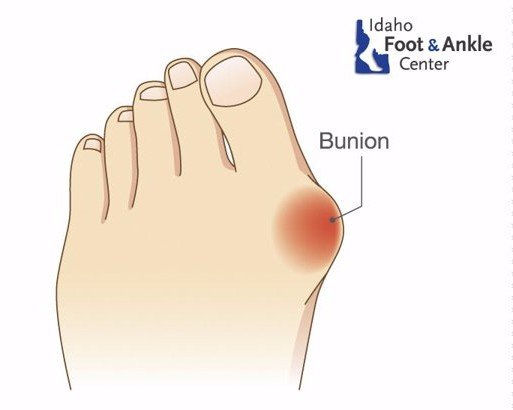 A bunion is a bone deformity caused by an enlargement of the joint at the base and side of the big toe. Bunions form when the toe moves out of place and causes friction and pressure when it rubs against footwear. The growing enlargement then causes more irritation or inflammation.

WHAT ARE THE SYMPTOMS? Many people with bunions suffer from discomfort and pain from the constant irritation, rubbing, and friction of the enlargement against shoes. The skin over the toe becomes red and tender. Because this joint flexes with every step, the bigger the bunion gets, the more it hurts to walk.

WHAT CAUSES BUNIONS? Bunions are not hereditary, but they do tend to run in families, usually because of a faulty foot structure. Other causes are:

It is estimated that more than 3 million Americans are diagnosed with bunions every year, but many do not seek treatment. This was the case with Nancy. She struggled with a bunion on her right foot for years, but she avoided sandals instead of seeking treatment. It continued to get worse until walking became very difficult and painful. Nancy said because she had walked with the bunion for so many years, her whole foot was out of alignment. Nancy knew the bunion would only get worse, and that the only fix for bad cases is surgery. She was worried about the recovery time for a bunion surgery because she had known people who had been in casts for weeks following bunion surgery.

When Nancy heard about a new procedure called Lapiplasty, she was skeptical it would work. In the past, a common misconception was that a bunion was simply an overgrowth of bone that can be “shaved off”. Traditional surgeries targeted the cosmetic bump by cutting and shifting the bone. Bunions were returning in up to 70% of patients! However, the root cause of the bunion is an unstable foundation which allows the bone to drift out of alignment, causing the visible “bump” on the inside of the foot .

HOW DOES IT WORK? Lapiplasty is a 3D Bunion Correction™ Procedure that fixes the root cause of bunions . It corrects the alignment AND secures the foundation . The Lapiplasty® Procedure will restore your natural anatomy. Instead of cutting and shifting the bone, the bone is rotated and put back into position which will eliminate the unsightly bump. The unstable foundation will be permanently secured with patented, titanium technology and you can get back to the activities you love!

THE RESULTS? Recent data shows that approximately 97% of Lapiplasty patients maintained their bunion correction 13 months following the procedure! Nancy finally decided to give Lapiplasty a try after dealing with her embarrassing bunion with for years. She says, “ It was a lot simpler than I expected. I’m surprised. I was pretty scared before, and I was concerned about maintaining my flexibility in that toe—but I can move it already. It gets better every day.” Because there is less cutting and bone work involved with Lapiplasty than traditional bunion surgery, recovery can be easier. Now her foot looks better, feels better, and she is looking forward to wearing sandals whenever she wants this summer! Nancy says, “I would absolutely recommend this to others!”Idaho Foot and Ankle Center is now offering Lapiplasty for their patients. Dr. Kylin Kovac and Dr. Jed Erickson specialize in the treatment of bunions as well as many other foot and ankle issues. If you are struggling with bunions or have other concerns about your feet or ankles, contact their office for an appointment to determine the right course of treatment for you.Some content provided by rd.com and treace.com. Find more of Nancy’s story at https://www.rd.com/health/bunion-surgery-was-walking-days-later/?fbclid=IwAR0fEmKZgzXVT3xhzaBt45BwXPBYEz9s7ksUxoedepSCJvpTp-Ski8xTXSY